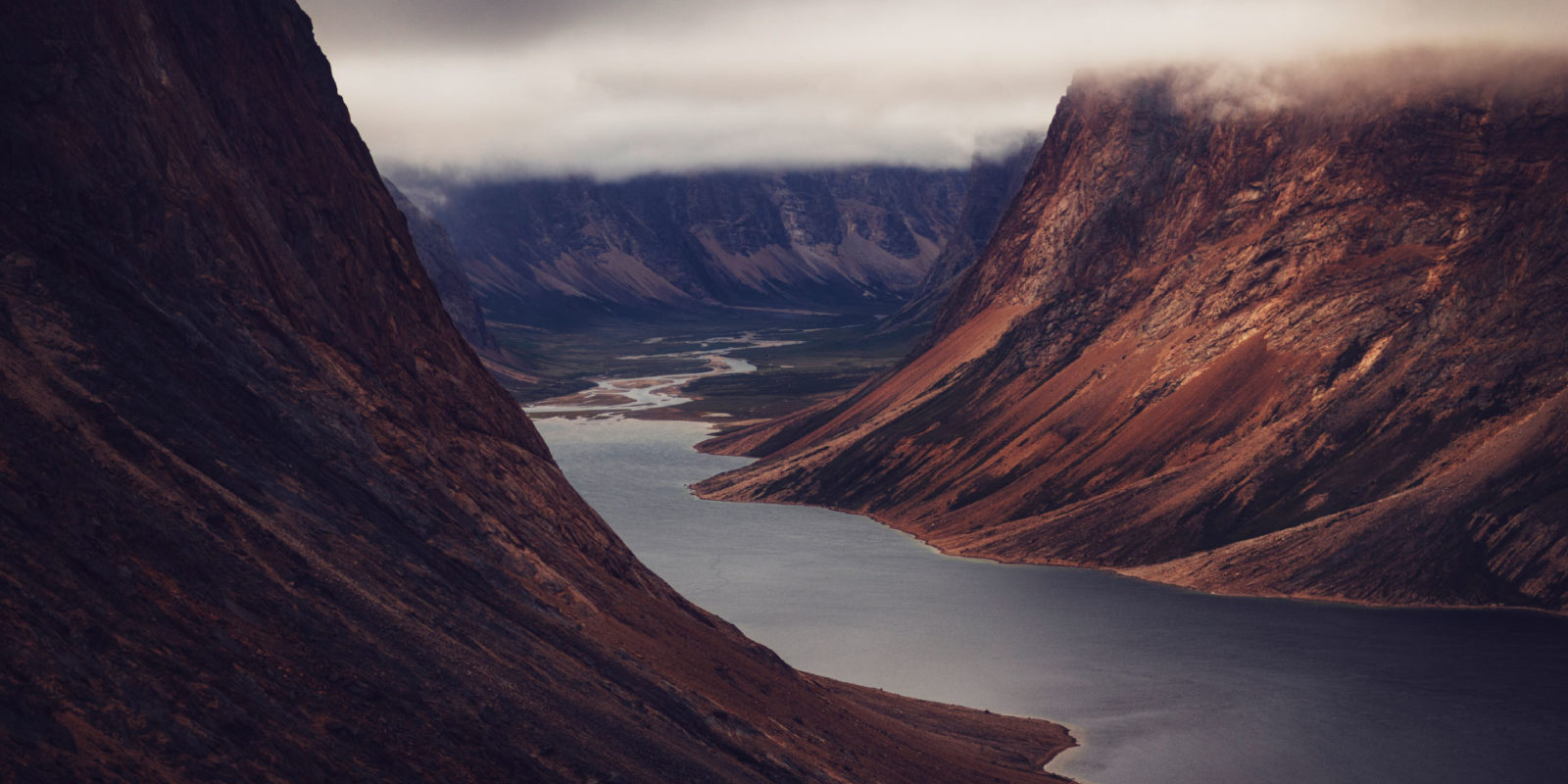 Polar bears are abundent in this region, where they swim between small islands hunting for fish and seal.

BY CAROL PATTERSON
PHOTOGRAPHS BY ANNE FARRAR
FROM DEEP IN an ink-blue fjord a minke whale surfaces, as if to prove that this “place of spirits” on the northern tip of Canada’s Newfoundland and Labrador province lives up to its Inuktitut name.

The chug of an outboard motor is among the few signs that humans populate the rugged landscape of Torngat Mountains National Park. “Populate” is a loose term: There are no roads or year-round settlements in this sprawling area roughly three times the size of Rhode Island.

Visitors arrive by boat at Saglek Fjord’s North Arm, where they can fish for Arctic char. Inuit have camped here in the summertime for thousands of years.

Freshly caught Arctic char, a staple in the region, tastes like a cross between salmon and trout.

Dwarfing a Zodiac, an iceberg calved long ago from western Greenland or the Canadian Arctic glimmers in the sun.

Polar bears are abundent in this region, where they swim between small islands hunting for fish and seal.

Artifacts recovered from around the park include antlers from caribou, a traditional source of food for the Inuit.

For the Inuit, caring for this land is a longstanding tradition; for centuries seasonal groups have lived here, following wildlife, navigating iceberg-dotted coastlines and rocky islands, and braving unpredictable weather.

But the growth of tourism and the priority of protecting public lands has placed this remote region within reach of travelers. Don’t worry about being crowded out: Fewer than six hundred visit each year.

Right: Dusk settles across the tip of Saglek Bay in Labrador.

Those who make the effort to reach this spirited place find an unspoiled landscape, where the wind whistles across some of Canada’s oldest rocks as caribou pause on barren mountain slopes.

“I don’t think people understand the strong connection Inuit have to the land,” says Jillian Larkham, tourism director at Nunatsiavut Government, the first Inuit regional governmental body in Newfoundland and Labrador. “Once you go to Torngat, out of cell service, you have a more meaningful outlook.”

But what do you do with all this space? You follow the rocks.

While there are no formal trails in the park, Inuit have historically used rock cairns called inuksuit to mark routes (visitors are not allowed to build them).

Due to the prevalence of bears, hikers are discouraged from exploring alone. “There is an abundance of polar bears in the area and visitors are pretty much guaranteed to see one,” says park superintendent Gary Baikie.

To keep visitors safe, armed Inuit bear guards lead excursions. “They have a lot of knowledge of hunting and of bear activity” passed down through the generations, Baikie says.

All hikes start at the north arm of Saglek Fjord at Silluak, where a rocky beach cradled by steep scree walls (created from rocks sliding down the fjord cliffs) gives way to a broad meadow. Depending on bear sightings and weather, routes can change.

In warmer seasons a faded path leads from the beach, through low shrubs and white flowers bobbing in the breeze. Hikers carefully cross a narrow ravine to a peaceful glacial lake ringed by fine golden sand, bear prints toeing the water’s edge.

Here’s how to plan a trip to Newfoundland and the Labrador Coast.