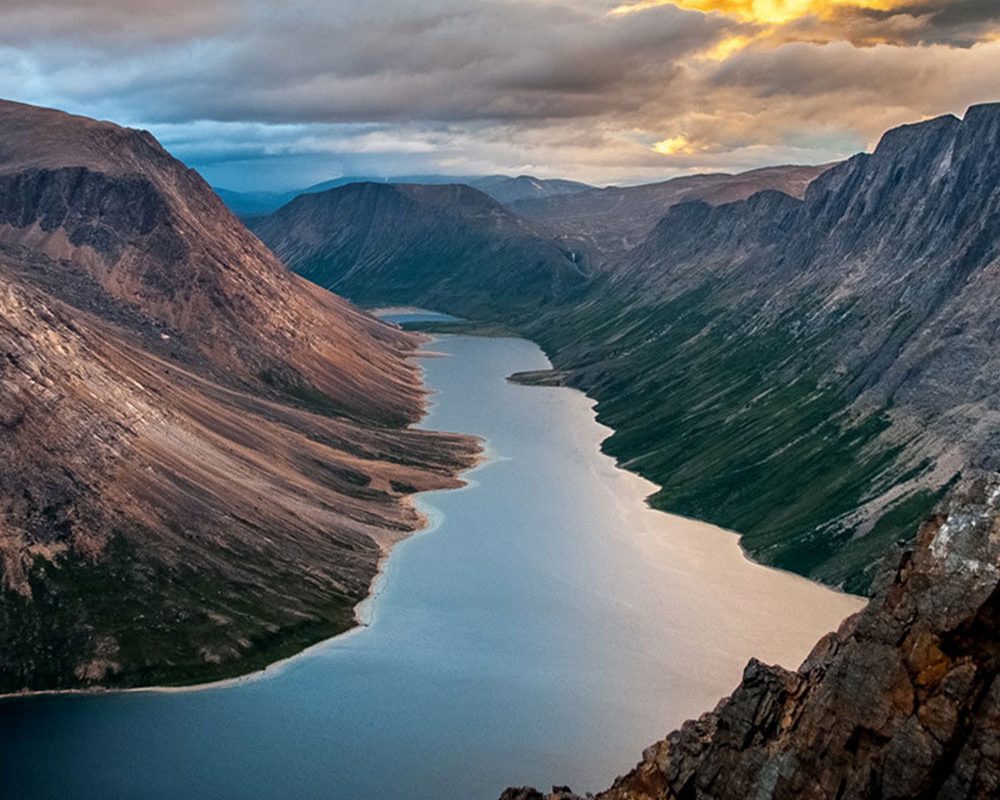 Freelance adventurer Stephanie Porter shares the story of her week at Torngat Base Camp, where Inuit entrepreneurs are working to transform their traditional culture into twenty-first-century currency

At the gravel airstrip in Nain, Labrador’s northernmost community, pilot Rich Martin is expertly packing the helicopter. He’s obviously well practiced in filling all the nooks and crannies with a pickup load of boxes and bags, leaving just enough room for three passengers. The weather hasn’t been good for flying the past few days—and fog is threatening to descend again—so the helicopter bound for Torngat Mountain Base Camp and Research Station has been charged with bringing a few overdue supplies, taking advantage of the short window of clear air.

I climb in, next to the new heaters, slabs of Carnation milk tins, coffee canisters, and other odds and ends. There’s not a lot of room, but I strap in, don the headset, and get ready for my first helicopter ride.

We lift off from Nain for the 200-km flight north. The 48 hours I’d spent there (longer than planned, thanks to that fog) was my first experience in a northern Labrador Inuit community, and it was eye-opening: Nain is beautiful, active, bustling with new subdivisions and growing. The population is currently about 1,200, but that swells in the summer months with an influx of workers in the construction business.

Most visitors travel to Base Camp from Goose Bay on a Twin Otter or other small airplane, land at Saglek airstrip, then take a short Zodiac ride to Base Camp, located just outside the southern boundary of Torngat Mountains National Park. Helicopters land directly at the camp.

Our 50-minute flight takes us over shockingly beautiful scenery. Each peak or ridge we crest reveals another, taller, more dramatic. Trees diminish in size and dwindle in numbers as we approach, and then cross, the treeline. Icebergs dot the sea. Sharp mountaintops cut into the sky as far as the eye can see. Martin spots a black bear and takes us in low for a close look. A few minutes later, we make another sightseeing circle over Hebron, an Inuit community founded by Moravian missionaries in 1830 and forcibly resettled in 1959. A handful of Inuit, with roots in the old community, live there in the summer, offering tours, sharing Hebron’s tragic story, and working to restore some of the buildings.

We swoop over a final ridge and Base Camp appears at the edge of a beach, surrounded by rocky cliffs. A triangle of white canvas tents, green domes, yellow and red nylon tents, and a few containers and out buildings are spread around a central building, all encircled by a 650-metre electrified bear fence.

There is no cell phone service or Internet availability here; solar power is backed up by diesel generators. This will be my home for the next week, and the people here, my community. I haven’t even set foot to ground and I’m overwhelmed by the scale, drama, and expanse of the land—and the remoteness of camp.